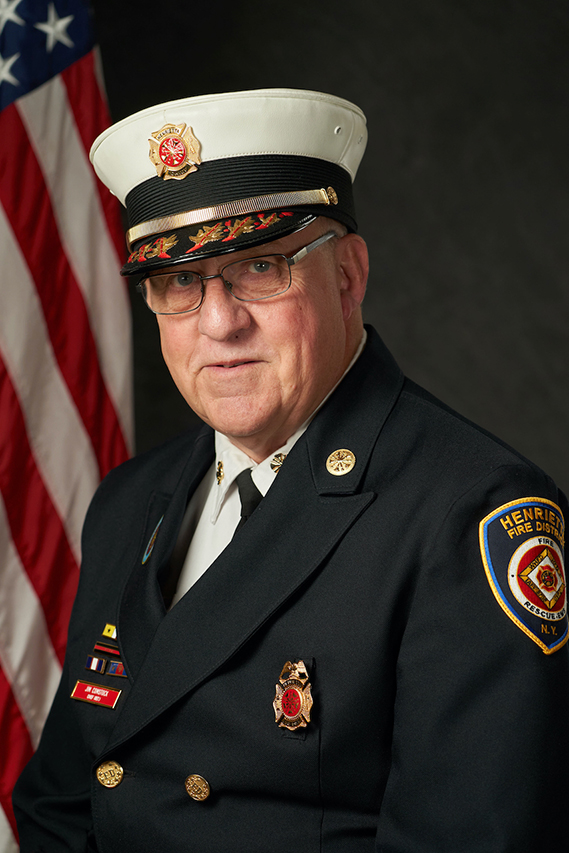 Chief (Ret.) James R. Comstock was first introduced to the fire service as a small child. His father was a member and captain of the Mattydale Fire Department and later an assistant chief with the Calcium Fire Department. Comstock joined the Henrietta Fire District in 1976 as a volunteer firefighter, rising to the rank of battalion chief. He became a career employee of the Henrietta Fire District in 1984, served as a firefighter, lieutenant, captain, and battalion chief, and chief from 2006 until his retirement in 2017. Comstock holds a bachelor of arts degree in economics and business from Baldwin Wallace College. He served as an instructor for the Monroe County Fire Bureau for 13 years, was a New York state fire instructor for 10 years, and also served as a specialty lecturer for the Monroe Community College Criminal Justice Training Center for 12 years. Comstock served as an incident commander and operations section chief with the Western NY IMAT. He also served as an original member of the Monroe County Special Operations Leadership Team, as an IST member for the team, and was a New York state EMT and code enforcement officer. Comstock has been a member of NYSAFC since 2004 and served on the Paid Officers Committee from 2010-2015. He has also been active with the Career Fire Chiefs of New York State and served as president from 2011-2015. Under the leadership of NYSAFC Past President Skip Sylvester, NYSAFC and CFCNYS created the Career Fire Chiefs Section of NYSAFC in 2011. Comstock is a member of the International Association of Fire Chiefs, IAFC Volunteer & Combination Officers Section, International Code Council, and National Fire Protection Association. He has served as a youth sports coach and an assistant scoutmaster with the Boy Scouts of America. Jim lives in Henrietta with his wife Susan. Comstock’s daughter Sarah and son-in-law live nearby with his grandson and granddaughter, while his son Jason resides in Florida.