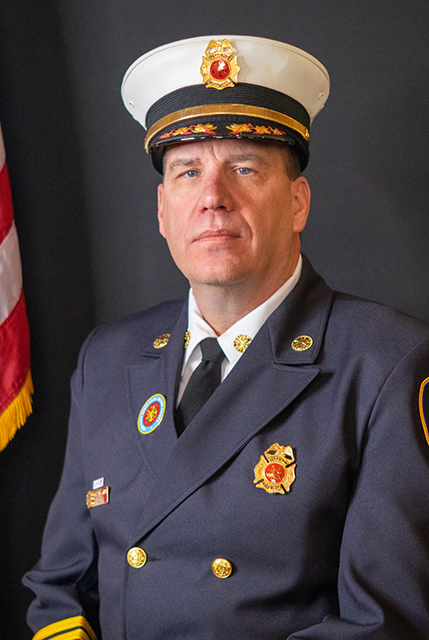 Chief Mark Strzyzynski was born and raised in Henrietta, NY. He attended Monroe Community College, where he received an A.A.S degree in fire protection. Strzyzynski began his emergency services career in 1983 an EMT. In 1989, he was hired by the Rochester Fire Department, where he worked in the department’s busiest truck and engine companies early in his career as a firefighter, lieutenant, and captain. Strzyzynski spent time as the acting deputy chief of training, overseeing all fire academy administrations, and retired from the RFD after 25 years as a battalion chief. He was awarded numerous commendations, including Firehouse Magazine’s Heroism Award for the rescue of a child in 1989 and NYSAFC's 2021 New York State Career Fire Chief of the Year Award. Strzyzynski previously spent 10 years volunteering at the Henrietta Fire District and upon retirement from RFD, was hired by the Henrietta Fire District as the first career assistant fire chief. In January 2017, he was promoted to fire chief, and led the combination all-hazards department with 60 career and 55 volunteer members until retiring in January 2021. Strzyzynski is a credentialed chief fire officer (CFO) and holds multiple FEMA ICS Type 3 certifications, including incident commander, operation section chief, and planning section chief. He is a founding member of the Western New York State Incident Management Team (Type III). Strzyzynski was the leader and key in building the foundation for the IST in Monroe County. He is currently a professor at Monroe Community Collage teaching in the fire protection degree program. Mark and his wife, Annmarie, have a daughter, Sara, a son, Steve, a daughter-in-law, Jen, and a granddaughter, McKenna.